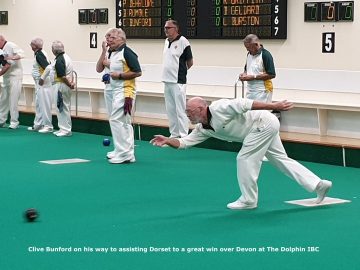 Dorset Men took on Devon at The Dolphin, and no-one expected the thrilling game, and nail biting end, that we were lucky to be a part of.  Dorset got off to a strong start –

After 10 ends the score was 80 – 58, Dorset forging ahead by an unbelievable 32 shots, however, Devon don’t give up easily

However, this is all a bit misleading as 1 rink was some 4 ends behind the rest, with Dorset having killed 5 ends during the match.  The 5 rinks who had finished scored 7 -1 across their 21st ends, bringing the scores to within 1 shot.  The final rink scored 1’s on their 18th & 19th ends to put Dorset 1 ahead, but on the 20th end dropped a 2, meaning Devon were now 1 up in the match, with 1 to play.  The 21st head changed a number of times, but when the skips had 1 wood left each, Dorset were holding just 1, enough for a draw.  The Devon skip, having had some “fortune” on the previous end to get the 2, had some misfortune here, knocking a Dorset wood in for 2, saving the Dorset Skip from having to bowl the last wood to win the match, and claim an excellent scalp.  The final score was 126 – 125, well done Dorset, and what a way to end the final match of this year.  Pheeew. 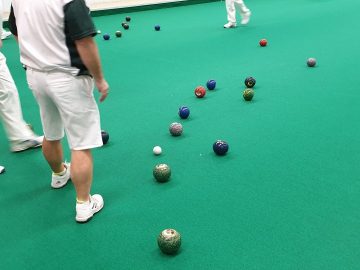